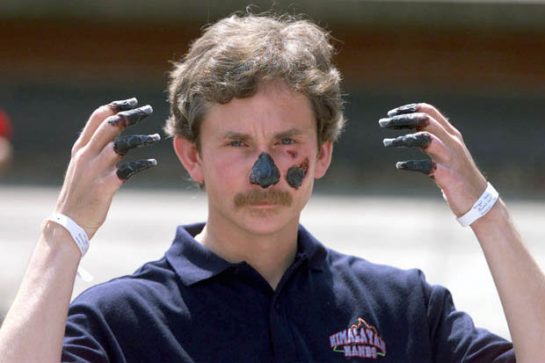 The phrase ‘The day we stop learning is the day we die’, may be old, but it’s true. I thought after 17 years I had learned all there was to know about my frostbite injuries, but I was wrong. Though the amputations were very visible, regular treatment kept my skin grafts in good condition, and all was well with the world. The last few months however, have taught me a hard lesson in reality.

I grew up in the 1970s. It was a time of flared trousers, Kaftans and long hair.  I began my education at Long Row school in Belper where I was found to be in a minority of children, as I was one of the 10% who were naturally left-handed. The modern world seems to have little issue with this, but the 1970s were very different time. I was instructed to write with my right hand and conform with the rest of society. This I did as I was young, impressionable and thought the teacher right. Over time I learned to have a dominant right hand.  Though I saw a little problem in this, later in life I realised that I had a dominant left eye. This has caused confusion for my brain ever since.

When I was airlifted from Mt. McKinley in May 1999 I had a little idea how my life was to change.  Loosing the ability to use my hands showed me that I was going to be reliant on others help.  Nurses brushed may teeth and spoon fed me for the first few weeks, before I gained the ability to grip again.  Surgery eventually took my fingers away, but my hands were operated on separately and weeks apart, to allow me a single hand to help myself.  Here my childhood memories returned, as for a few of weeks, I only had my left hand.

When we’re forced into a situation with no alternative, we have to adapt.  For many years I’ve trained and assessed expeditions in the outdoors.  One of the classic tests was to blindfold people as ask them to complete a task.  Recently I have been working on the National Citizenship Scheme, where one such exercise was to climb on a rockwall, whilst blindfolded.  People wanted to climb, using their sense of touch only.  There were a great many shouts of ‘grab the yellow hold’, which to this day, still confuses me..!  The exercise was useful for learning about sensory use, but everyone knew that once it was over, the blindfolds would come off and normality would soon return.  Though I understood that my hands would eventually recover from surgery, i knew that it would be weeks or months before I could use them effectively again.  The situation called for quick adaption and with a week I could write, shave, eat and brush my teeth with either hand.  It wasn’t easy, but necessity was (and still is) the mother of all invention.  To this day (and when my hands are working) I can still operate two mice on two computers at once, shave and brush my teeth at the same time and write with either hand.

I needed a push, a reason, a demand to change.  It is a situation that many in society require to do something they know is right, but few choose.  I wonder how many of you have been in a relationship that you knew wasn’t right, a job you hated, a house that didn’t fit, yet you stayed where you were and didn’t change.  Though some financial aspects come into consideration, many understand that taking the plunge and taking the hard decision is, in the end, the best thing to do.

During the last few months of nerve pain, I’ve returned to using both hands to help spread the load.  Excessive typing makes my (now dominant) right hand go numb within minutes, so i need to use my hands sparingly and take decisions on what important, what needs my time and what needs the use of my hands.

I wonder how many of us still need pushing to make choices and decisions..?

6 thoughts on “Forcing Your Hand…”