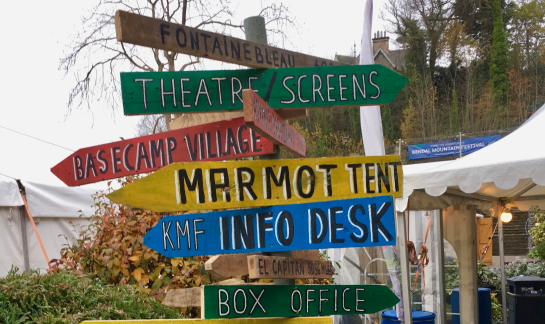 Because of the squally weather, there wasn’t the usual open air films to open the festival, but a parade through the town.  It was reminiscent of a torchlight parade in the Alps (but with head torches rather than flaming, no doubt because of risk assessments), with lots of bell ringing and a band.  The Town Hall was opened up for the film show, starting the festival with a bang.

The weather soon began to have its effects as road closures and accidents surrounded Kendal.  The M6 and A66 both suffered, but as a crowd of mountaineers, climbers, skiers, kayakers and whoever else, we’re a pretty tough bunch.

My festival began with a wonderful show.  For years, the world has been in awe of BBC Natural History Films and Sir David Attenborough.  I vividly remember watching ‘Life on Earth’ in the 1970’s as a child, and I’ve been hooked ever since.  Planet Earth II has recently hit our screens, with accolades galore, and it was a pleasure to introduce BBC Natural History Producer / Director Justin Anderson and Assistant Producer Emma Brennand for an exclusive ‘behind the scenes’ view of the ‘Mountains’ episode.  Emma has been involved with Kendal before and is a good friend.  The show was a real insight to see what goes on behind the scenes and how much effort is put into making documentaries.  The pubic see a single episode in under an hour, but years of filming, thousands of miles of travelling and weeks of waiting go into a single episode.  Real imagination is needed utilising everything from beam triggered cameras to paragliding cameramen..!  Justin and Emma brought this epic to life in front of a packed house with ease.  The audience were transfixed with Snow Leopards, Golden Eagles and the now famed Funky Bears..!  We had to almost push people out of the door at the end of the session because of the wonderful Q&A, but we have a festival to run.

There was a big change at the festival this year in the programming of films.  Over the years, they’ve been entitled ‘Mountaineering’, ‘Climbing’ or ‘White Water’ etc.  Now we use ‘Joy’, ‘Courage’ and ‘Conviction’, to name but a few.  I’m not a particularly arty person, and concentrate of the films and their presentation, but it seemed to work well enough.  Two films that really caught my eye were ‘Ace and the Desert Dog‘, a tale of walking 600 miles with mans best friend and ‘Johanna‘ which sees freediver diver Johanna Nordblad saving her broken leg by diving under the ice.  It was opened by Director Ian Derry and won ‘Best Visual Film’.  We seem to live in an age where dramatic music, dozens of drones and digital enhancement rule, but these two films were truly beautiful.

We’ve all heard of Mallory and Whymper, but I wonder how many of you have heard of Albert Smith..?  A man who climbed Mt Blanc in 1851 and brought his show to London.  Alan McNee spoke of Smiths climb (which included cases of wine and champagne), and the way he created a spectacle which is the forerunner of all mountaineering festivals.  Yes, he probably boasted about his climb, yes, he courted the great people of the day, and yes, he went to town on merchandising, but he brought mountaineering to the masses and ever since, people have flocked to the Alps.

Sunshine greeted the Sunday morning, although there were a few sad faces from the previous evenings revelling (well, this is Kendal after all).  I opened for rights of way officer and mountain guide, Nick Burton.  He spoke about the mass trespasses onto the moors of Lancashire and the Lakeland, which happened long before the well documented Kinder Trespass of 1932.  Tens of thousands of people voted with their feet to keep ancient rights of way open, and allow access to the beautiful moors above their industrial towns, to access views and well needed fresh air.  It’s a little reported part of history, but a vital one which paved the way for our access into the hills and mountains.

My festival ended with a very special evening, in the company of Boardman Tasker Award winner Simon McCartney.  His book “The Bond‘ talks of epic climbs on Mt. McKinley, a place we both know well.  Simon was a delightful chap to meet and seemed truly stunned that he had won. We discussed high altitude epics and writing over dinner, before the sun set over my weekend.

What a wonderful finale to the festival…