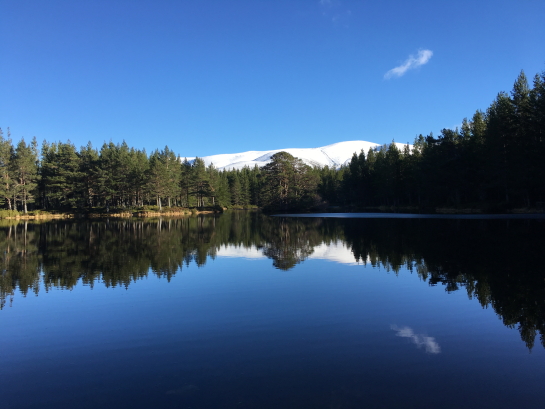 My eyes had been stuck on the weather forecast for weeks, before my annual trip into the Highlands with my friend Ian.  There had been snow, sun, snow, sun, ice, melt, ice, melt, and then Storm Doris had her day.  Reports of driving blizzards and road closures filled my heart with joy.  There would at least be snow..!

Arriving at Badguish revealed a barren Glenmore, but from a distance the Northern Corries looked ok.  A clear night would at least allow the temperature to fall.  The forecast for the following day was generally clear skies and high winds, and it didn’t disappoint as Ian and I walked onto the Cairngorm Plateau and almost took off..!  We wanted to look at climbing conditions close up and found the avalanche risk considerable, and much of the deep snow literally blasted away.  Any thoughts we’d had of wandering high onto Cairngorm itself were soon dashed by thick cloud being blown in.  I was time to retreat…

We returned in beautiful conditions the following day to climb Aladdin’s Couloir.  Many people were already heading that way, but they had cleared by the time we had kitted up.  Conditions further right into the Trident Gullies looked hair-raising due to large cornices up top.  The exit from Aladdin’s was far from Grade 1 due to a huge lolloping overhang.  Thankfully the turf was well frozen and we soloed the grade 2 exit onto a peaceful plateau.  My forearms and hands are still struggling with nerve sensation and pain, which made the exit a little testing.  Whilst some prefer to climb leashless with their ice axes, I was glad to be firmly strapped on to mine.  I first entered the leash debate whilst climbing in La Grave in France over a decade ago.  I was learning to climb again on the frozen ice falls when I met a climber from the Pyrenees.  He was very much in favour of climbing free with his axes, but did agree that due to my injuries, it would be a different matter for me.  Hopefully I will get a resolution for my hands sooner rather than later, but until that day, I’ll be firmly strapped on.

The weather was on the change again, and we hoped for a low-level walk to the bothy at Ruigh Aiteachain.  The plan was to stay the night as we’d no accommodation booked.  Bothies are a wonderfully peaceful and remote place to stay, particularly when they’re open.  We’d spoken to the rangers at Cairngorm about the best option, and after a very wet walk in, we were confronted by a building site.  New roofs, beams and boards were being constructed, with no hope of shelter for us.  With heavy hearts we turned tail, heading the five miles back out to the car under thankfully improving skies.  The long and short of our plan came to such opposites and by the end of the evening, as we were tucked up in a hotel..!  How the best laid plans change…

Heavy snow fell and reports came in later of climbers either wading or swimming through deep and dangerous powder, in the aim of climbing a route.  I’ve dug through many a cornice in my time, but wading over a grade 3 route seemed foolhardy at best.  I’m glad that we kept low, walking through the forests of Glenmore and Rothiemurchus under bluebird skies.  We had quite an adventure as I navigated a wrong turn and we crossed the River Druie via a selection of windfallen trees.  Still, if nothing ever went wrong, life would be boring..!

A ski touring day onto Cairngorm followed, but the lower half of the mountain was bare, and we only just made it down towards the Day Lodge in one piece.  Lots of off piste was available, but the amount of grass and rock protruding through was hair-raising.  The Cairngorms, like many ranges in Scotland has suffered a difficult season.  Poor snows and high winds have caused havoc when it comes to snow sports.  There are reports of possible job losses at Cairngorm Mountain due to losses of £1.25 Million.  It’s always sad to read such news, but the world of capitalism does not run on goodwill.  I skied in the Dolomites earlier in the season, where man-made snow was the saviour of the day, but the cold weather was on their side.  In Scotland, the temperature was up and down like a yo-yo, preventing any chance of snow making on the piste.  I can only hope for snow and more settled and cold conditions.  It seems the Americans have stolen the cold weather..!

And so, another trip was over. Work beckons and I can only look at the forecasts to see if anything improves in the Highlands.  I’ve ice climbed in my native Derbyshire before, but I fear the cold will not come again this season, and my hands need sorting out.  Not being able to feel the shafts of your Ice Axes when you’re hanging onto them isn’t fun..!