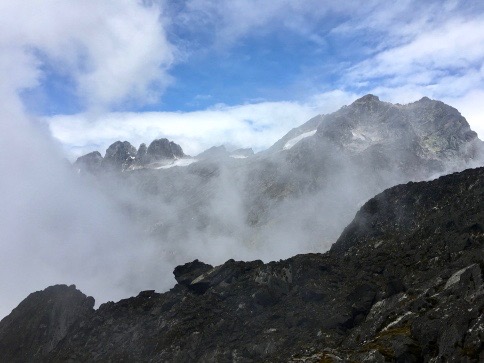 Onward we fought, until we attained the steel signposted summit just past 2pm.  It was a wonderful feeling of achievement even if there was no view because of the increasing clouds.  It had already been a physically demanding day, but as with all peaks, attaining the summit is only half the journey.  We abseiled in a stiffening crosswind and descended the screes until the giant lobelia greeted us again.  Thankfully so did the porters and our cook, armed with hot drinks and pancakes.  They were a very welcome sight indeed..!  Darkness slowly fell making the decent more than hair-raising, but we stumbled into camp past 9pm, forcing food down ourselves before bed.

The next morning there were plenty of aches and pains, but we had to get to the Elena Hut.  Wellies were the name of the game again as the bog was horrific.  We were all plastered in mud as we climbed out of the valley and onto mixed high ground via some very interesting steel ladders..!  Rain, then sleet, then snow began to fall, and crossing the open stone landscape became hard work.  The mosses and lichens which adorn the stone make it incredibly slippy, but we climbed up to the hut which stands at 4541m by mid afternoon.  The snow thankfully abated, allowing Mt Stanley and much of the Ruwenzori Range to com into view.  Cotton wool like clouds filled the valleys and danced over the pointed summits.  All was peaceful as we prepared for the next mornings onslaught up the hill.

My alarm sounded at 2am, and by 3 we were off.  Initially all went well, and we ascended steep rocks, some fixed ropes and then crossed the glaciated Stanley Plateau.  It was good to clip on my crampons and feel Equatorial Ice.  Dawn broke to our right with a mesmerizing display of crimson reds and bright yellows as the sun cleared the horizon.  Progress over the ice was swift, but we were soon back onto rock, descending a long fixed rope and crossing the moraine field below the Margherita Glacier.  The ice has retreated over 100m in only six years, cutting the old route in two.  A short ladder decent used to give direct access onto the ice and then the peak, but the ladders now dangle, abandoned from the rock face.

We needed to climb the glacier, cross under a serac field and then attain the summit.  It all sounded so simple, but the blue ice was rock hard and Nthabiseng was struggling.  She had somehow gained a neck injury and was fighting for every step.  We had a discussion about continuing, choosing to go for the summit as the weather looked good.  We had to climb pitches on the glacier before walking over powder snow and finally standing on the highest point in Uganda.  Margherita Peak 5109m (16,763ft) borders both Uganda and the Congo, so we stood across two borders as we posed for the summit shots.  There was little time for celebration though as the view was clouded and Nthabiseng was struggling badly.  It’s was almost 3 o’clock and we had a long journey home.  What followed was painful to experience as Nthabiseng fought for every step.  We descended the Glacier and crossed the moraine field in daylight, but as the sunset, gentle rain began to fall.  Aided by the guides, Nthabiseng fought up the fixed ropes as Sibusiso and myself followed on.  She asked to be left and a rescue team called, but we don’t leave people on the hill.  That was a lesson I had learned the hard way in 1999.  Watching Nthabiseng struggle reminded me of how Steve and Antony must have felt when aiding me across the football field on Mt. McKinley those 18 years ago.  The rain stiffened and brought with it thick fog, which our headlamps beams, no matter how powerful, couldn’t break through more than a few feet.  After a great deal of searching, we found the ice of the Stanley Plateau and crossed it painfully slowly, relying on bamboo canes which marked the way home.  By now it was pitch black and we had blank and featureless rock to descend, but there was some light in this morass of despair – the cooks had come again.  Armed with failing torches and lights on their telephones, they had scaled the soaking rocks and come to help us down.  Nthabiseng looked like a ghost, but slowly walked onward as we followed.  You never leave anyone to follow on behind you, instead they set the pace.  It wasn’t cold and the winds were light, but it was still hard to see your hand before your face.

We stumbled into camp at 2am, eager to sleep, but I made sure we eat and drank to allow our bodies to recharge before morning.  Sibu and I sat laughing at the absurdity of the day, but we were home, safe and in one piece.

Over the next couple of days we completed the circular walk out of the park and back to the roadbed.  Nthabiseng was still struggling, but the warming weather and sunshine helped her along.  We left the Ruwenzori with wonderful memories of the beautiful mountains, flora and fauna and aching limbs.  The bog was over..!

As a child, I was mesmerised by the BBC series ‘Life on Earth’.  One scene in particular has resonated within me for many years – Sir David Attenborough and his encounter with the Mountain Gorillas of then Zaire (now the Congo).  This short piece is surely one of the most poignant pieces of wildlife footage ever filmed.  The last part of our trip was to visit the Bwindi Impenetrable Forest and hope to see these wonderful primates.

Nature offers no guarantees, but the habitualised groups of Gorillas are well tracked and protected.  After an intense briefing, we sealed up against ants, flies and bugs, joined our guides and headed into the dense forest.  Trackers had already found a group, but getting to them was another matter.  The forest isn’t quite impenetrable, but vines, thorns and foliage had to be cut away with parangs, and steep slopes negotiated.  It was almost like being back in the Ruwenzori..!  I slipped and slid all over the place due to my lack of toes and found that being over six feet didn’t help, as creepers galore wrapped around my face.  After around an hour a hush crept over us as the Gorillas were close and all the ills suddenly faded away.  Only a few feet before us, sat a group of some of the most wonderful primates in the world.  They seemed relaxed and comfortable with the approach of a group of other primates, strangely dressed and armed with hoards of cameras.  The amount of clicking was almost overpowering, but it soon began to wane as people slowly realised that eyes are much better than lenses.  Only a few feet before us lay a large male silverback, a female and two youngsters.  The male sun bathed in complete peace as the female stripped leaves from young, succulent branches.  The youngsters, used to human contact, decided to be the stars of the show and play before our eyes.  Their swinging and chest beating was comical and we occasionally had to back up a little as they fearlessly approached us.  A young male tried to bait the silverback, but he was having none of it.  Fresh facial scars brought home recent clashes, but he knew who was in charge.  Gorillas eyes are black and seem endlessly deep.  Some people say that they look sad, but I found peace and balance in their faces.  They work with nature and live in beautiful balance with it.  After a while they slowly got up and effortlessly moved through the undergrowth.  We had a difficult time following on, but with only an hour allowed in contact we broke off and headed downhill, precariously crossing a stream and exiting the forest.  If the last hour hadn’t been enough of an experience, a male poked his head through the greenery and began to drink.  The guides were as amazed as we were, as seeing a gorilla drink is almost unknown.  They get enough moisture from their diet of greenery, but here this peaceful and beautiful gorilla sipped at the running water.  We looked at him and he looked at us.  What was only moments seemed hours and as silently as he had appeared, the gorilla slipped away into the forest.

The next morning we had a short flight back to Entebbe and out trip was done.  Uganda offers wonderful opportunities for adventure and we only scratched the surface.  There are many more mountains, parks and rivers to explore, but my three weeks allowed me a taste of this East African gem.

I hope to return one day…