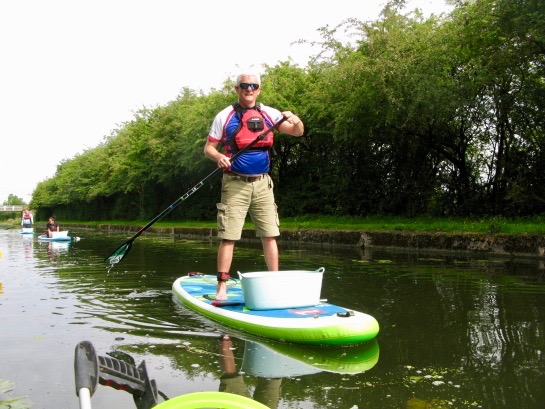 The world is filling with litter.  You only have to walk down a street, look in a lay by or attend a sporting event to see it.  The aftermath of any music festival is a disgrace, and people attending seem to think that whatever they dump doesn’t matter.  Dog owners pick up dog poo and the leave the bag on the floor.  A few miles from my house is Junction 28 on the M1, which is legendary for its waste.  I’m sure there is an invisible road sign which reads ‘Please chuck your litter out of the window before joining the Motorway’.   That’s the bad news, but there is some good…

Recently I joined Lizzie Carrs ‘Plastic Patrol’.  Lizzie is a record breaking Stand Up Paddle Boarder and a fellow Ordnance Survey #GetOutside Champion.  During a journey across the waterways of Britain, she noticed huge amounts of plastic abandoned in rivers and canals.  This shocking mess inspired her to create a movement to not only clean up and remove the myriad of bottles, wrappers and packaging from the water, but to also advertise to the world, the mess we’re making.

I was joined by fellow champions The Meek Family and Zoe Homes at Shipley Lock on the Erewash Canal, near Ilkeston, along with outdoor enthusiast and kayaker Jo Elson.  Lizzie loves Stand Up Paddle Boarding and came armed with friends and a selection of boards.  Now, I’m useless on water, but like my diving exploits last year, I thought I’d give it a go.  I fully expected to get a dunking in the canal at some point..!  Thankfully the sun was shining and the water wasn’t very deep.  Boards were laid on the water and with a little trepidation, I kneeled down and cast off.  For years I’ve enjoyed paddling a Canadian canoe, but this felt different.  The boards flat bottom seemed stable enough, but we weren’t here to only play.  There was a serious side.  Armed with baskets and pickers we were soon searching the reeds for bottles and bags.  It wasn’t long before plenty of litter was retrieved and stacked.  All this kneeling was ok, but the idea of a Stand Up Paddle Board, is to Stand Up..!  Initially I tried to stand with my trainers on, but the amount of movement between the board and my stumpy feet was frankly scary.  It’s at time like this that I really miss my toes.  I wobbled with severe Elvis Leg and got back down, removing my footwear and casting it in the waste basket.  I stood again, with a little trepidation, paddled along the waterway.  There was a lot of shaking going on, but bit by bit, I kept moving forward.  Every day is a school day when it comes to my injuries, and I think this day was exams.  During my time on the board, I kneeled and stood a few times, eventually coming home with very sore thighs.

Thankfully I wasn’t alone on the board and there were plenty of us in varying states of confidence, scouring the waterway for plastic.  I was impressed by the cleanliness of the canal and met volunteers from the Canal and River Trust, who regularly work at maintaining this piece of the industrial revolution.  Passers-by thought it wonderful that people took time to keep places like this clean, but much of the old industrial land around us was in a poor state.  Plastic patrol can help clear the waterways, but as a people, we need to clean up our act.  We must stop using single use plastics, recycle what we can and dispose of other waste correctly.  The moorlands of the Peak District suffer as much as the water,  with bottles, wrappers and even needles.  I work in the electricity industry and on numerous occasions I’ve had to get land cleaned up because of people dumping waste.  ‘Out of sight, out of mind’, seems to be the norm, but when you’re wading through bags of nappies, rotting food and dead pets (yes, I really have), you have to question society’s morals and values.  People need to change for the world around them to change.

On a final note, I recently attended The Summer Nights Film Festival at Calke Abbey to watch outdoor cinema.  Time and again, the marshals and volunteers asked people to pick up their picnic waste and even supplied bags.  As the evening closed, myself and my friends packed up our chairs and bags and scoured the ground by torchlight to make sure the grass around us was clean.  As we walked towards the car park, I found a huge mess of bottles, cans and wrappers strewn upon the grass.  It was a damning example of people not caring.  As Benjamin Franklin once wrote – ‘God helps those who help themselves…’

Full marks to Lizzie for her Plastic Patrols, but unless society wakes up, all we will ever achieve is an operation to clean up the mess, once the horse has bolted.

As a nation we need to pull our socks up…