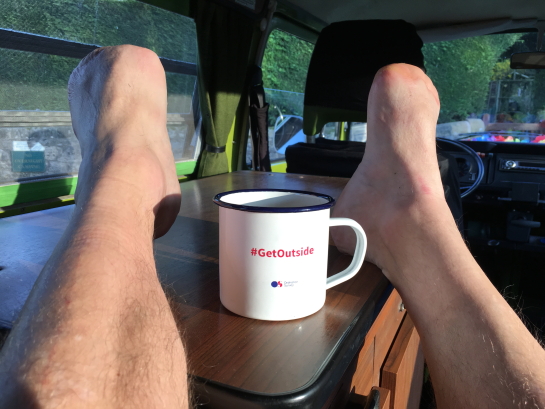 The end of 2017 is upon us, and it’s easy to look back and think that not much exciting happened.  It was just another year, like the one before and like the one to come.  Thankfully I write diaries and looking back, 2017 has certainly been packed with life experiences.

During January I joined Ordnance Survey as a #GetOutside Champion.  It was a bit of a shock to be selected as I’m no great blogger, but I do love the outdoors.  We were a mixed bag of walkers, cyclists, mountaineers etc., all with a great love of being outside.  We met in the New Forest and shared many ideas for the coming year and I was lucky enough to meet a number of them on the hill during 2017.  I hope we managed to enthuse others to do the same.

Winter brought the usual trips to Scotland and the Italian Dolomites, where I enjoyed climbing and skiing.  Conditions were lean, but there was just enough snow (barely in the Cairngorms) to get out every day.  I feel a great freedom in the mountains, and the fresh air invigorates my body and soul.

May saw the 18th anniversary of my McKinley epic.  It was a time of quiet reflection for me, a time to take stock of my injures and a time to think about the future of expeditions.  I have many plans, but more and more, I have to consider my wounds.

The nerves in my right arm have been troublesome for a while and for most of 2017 I’ve been under NHS care.  I’ve seen Physio’s, Occupational Therapists, Doctors and Consultants, with the unfortunate experience of being almost back where I started.  I’ve suffered too many opinions, poor communication, lack of understanding and in the end had to formally complain.  I find it sad that we still live in a world of ‘whoever shouts loudest gets treated’, but that seems the reality of the situation.  Targets are useful, but rushing creates confusion and wastes time.  In a simple example, I underwent Nerve Conduction Testing.  This entails short electric shocks being sent down your hands and arms, to test the nerve response.  Unfortunately one department forgot to tell another that my fingers were missing and the tests were cancelled.  The hospital was rushing, and missing the simplest of facts.  We all get things wrong, but quality is everything, where quantity is not.  Since then I’ve had surgery cancelled due to a change in diagnosis and opinion.  The tale will continue into 2018…

During the summer, I joined my great friend Sibusiso Vilane for a trip into the Rwenzori Mountains of Uganda, where we climbed high peaks and encountered both Chimpanzees and Mountain Gorillas.  After meeting over 10 years ago, we have become solid mountaineering partners, wonderful fiends and laugh endlessly together.  The Rwenzori mountains are renowned for their bogs, and to this day we still exchange message on that sticky subject.  I rediscovered my love for fishing whilst on Lake Victoria and have found it an excellent way to relax and shut the modern world away.  I’ve taken up fly-fishing and though casting with half your fingers missing is a challenge, I’m thoroughly enjoying it.  Being close to nature, with the minimum of fuss and gear has always been important to me.  I used to coarse fish as a teenager, but the modern sport seems to require a van or trailer to drag the gear around.  Fly-fishing is light, mobile and feels closer to nature.  I take no phone or watch, and only come home when the sun sets.

After my return from Uganda, I headed north to traverse the Cullin Ridge on Skye.  It’s something I’d wanted to do for years and during July I crossed the entire ridge in beautiful conditions with Martin Moran.  Even with my injuries, we were done in two days.  I was sore, stiff and tired, but very happy.  When we complete something wonderful or personal, its lovely to take in the experience and enjoy the moment.  Life however isn’t always that kind.  After descending from the ridge, I only managed a few hours rest before driving 500 miles south to give a speech of great importance.  It towered above any high paying corporate meeting, festival or event.  My great friend Iain had suddenly died, and I’d been asked to speak at his funeral.  Every problem in your own life falls into insignificance at such occasions and I wrote copious amounts of notes to make sure I forgot nothing.  About this time, I had been introduced to the writing of Michael Singer and was surrendering my life experiences, particularly my speaking.  I’d known Iain for over 20 years and put the notes away, took a breath and spoke intimately about friendship, shared experience, laughter and love.  He will be sorely missed…

I believe in quality, not quantity and during the year I joined a number of Twitter chats about the outdoors.  One question, which repeatedly came up, was about writing blogs and the number we need to create.  Cyril Connolly once said ‘Better to write for yourself and have no public, than to write for the public and have no self’.  I’ve always lived by that simple phrase.  The amount of data hitting our screens these days is overwhelming and in my view you need to write quality pieces.  I’d rather write from the heart, using personal experience and emotion, rather than write to get free kit or scream “look at me..!’  I ruffled a few feathers with an interview I gave with Cathy O’Dowd later in the year, as I gave my straight talking view on matters such a blogging, expeditions and the misuse of the word ‘Adventure’.  Opinions are vital in this ever-sterilising world.  The word ‘Snowflake’ was used by Ray Mears to describe many youngsters and their cotton wool upbringings, who live in a world where opinion seems to be fading away in fear of causing offence.  Some reports now state that the word ‘Snowflake” is offensive.  We even have a ‘Generation Snowflake’.  I’ll say only this – I grew up the 1970’s and 80’s and we got called a hell of a lot worse.  We might have taken offence, but we got on with life, rather than moaned endlessly about it.

The truth has hit me hard during 2017.  Both physically and emotionally I have felt exhausted and I have struggled with rest and sleep.  I took a great deal on, but with a singular purpose – to reduce my workload and give me time to breathe.  It’s been a very long and tiresome process, but after much negotiation, I’ll be in a job-share from mid 2018.  At times we need to hold our nerve when all around is chaos, but I have to admit burning the wick a little harder than I had hoped.  (Medical issues, work negotiations, full-time job, speaking and building work were all ongoing at the same time).  We rarely see our problems from the inside; usually waiting for others to tell us how ill, tired or lost we look.  I’m a poor listener, but friends have worn me down into believing it.  I sought professional advice and in less than 20 minutes, I was told that I was on the edge of physical collapse.  Welcome to the truth Nigel.  I’ve already turned down trips and commitments for 2018, which I could possibly do, because of the physical drain on my body.  The job share will affect my wage, but anyone who says that you can buy time is living in a dream world…

Speaking has been busy, with corporate, schools and festivals spread across the year.  I worked again at the Kendal Mountain Festival, spoke at Yestival, The Brathay Trust, SARDA and met a great many like-minded outdoor folk.

I’ve been fortunate to meet many wonderful people through my expeditions.  One such is Paul Gurney, who invited me to join Becoming X – which aims to “create a world where everyone has the confidence and skills to realise their full potential, no matter what their starting point in life”.  I was fortunate to film with Sir Ranulph Feinnes, sharing experiences from my life changes and will continue working with Paul during 2018.  Becoming X has interviewed many exciting people who i’m under wraps not to name, but the list is quite literally amazing in its quality.

My work as an ambassador for the Mountain Heritage Trust saw me at the opening of ‘British Women Climb’ and I’m part of a project to expand Mountaineering Heritage into education throughout the UK.  There’s still a lot of work to do, but good foundations have been laid.

I entitled this piece ‘Quality not Quantity’, because of my experiences during 2017.  We can write in quantity, measure quantity of patients, quantity of time or money, but without quality we are wasteful.  As I say, time cannot be purchased, or even stored for later, so quality it will be…

I’ll be working through the Festive season, as do many others in the Utility industry.  For years, the lights going out over Christmas and New Year caused problems due to lack of warmth or light.  Now more people complain because the Wi-Fi goes down.

My Thanks to Terra Nova Equipment for their continued support and both Buxton Mountain Rescue Team and The Duke of Edinburgh Award Scheme for their kind invitations.

Thankfully the building works on my house are complete, 2018 looks well planned, and though I’m drained, some sliver linings look within reach.

May I wish you all a Peaceful and Prosperous 2018…