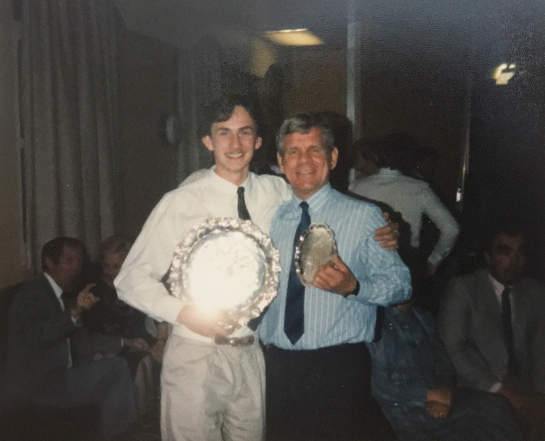 Many of us have mentors in our lives.  They are the people who inspire us, drive us, motivate us, rollock us and guide us (usually in equal measure).  Only a few days ago, I said goodbye to one of the best…

We met in 1988.  Bernard Topham was already well-known as a hardworking man, who some thought a slave driver.  They didn’t understand him at all.  I was a young Apprentice at the East Midlands Electricity Board and Bernard was a Cable Jointer.  He had a fearsome reputation and within seconds of hearing that I was to work with him, people laughed.  “You’ll not last a week lad”, was shouted at me again and again.  The voices were true.  I didn’t last a week.  I lasted two years.  Those two years taught me more huge amounts about work, determination, drive and leadership.

Our working relationship got off to an outrageous start, when Bernard chased me down a building site, screaming at the top of his voice and swinging a pick axe shaft over his head.  He wasn’t trying to scare or hurt me, he just thought it would be funny and frighten the builders..!  Over the coming months we worked almost nonstop, at all hours and usually on large, complex jobs and we loved it.  Some thought I had a hard life, but I enjoyed every minute.  All the larger jobs came our way, or the work that no-one else wanted.  We lapped it up, laughed and went home happy.  I soon learned that we should never be fearful of hard work, or shirk it away.  Bernard was also a wonderful teacher and spent hours helping me improve in my skills.  I was never as proficient as he was, but came on leaps and bounds with his guidance.

I was awarded the ‘Apprentice of the Year Award ‘ on Bernard’s recommendation and I felt very proud to take my parents and Bernard to the presentation.   After a couple of years I became a fully qualified jointer and went my own way, but we remained close friends. I was thankful of all he taught me and took the lessons through my life.  When I became an engineer, he respected my position and I respected his work.  We never had a bad word with each other.

As mountaineering entered my life, I found myself in difficult and stressful situations.  Many required physical and mental stamina and Bernard’s training really came into its own.  When times are tough, I always go back to a moment in my life when I truly understood Bernard’s character and what work needs.  We were digging up a street in Derby (we dug up a lot of them).  We had no tarmac cutter, so Bernard would mark the hole out with chalk and we would repeatedly hit the ground with a sledgehammer to break the surface free.  A Grafting Tool or heavy fork would then come out and down we’d go.  On this day, I was either tired, or the ground seemed tougher than usual and I remarked “it’s hard this Bernard”.  He looked me straight in the eye and said “Then be hard with it Kid..!”.  Those words have resonated through my life.  Up a mountain, in a jungle or on a desert, when things get hard, I can hear Bernard’s voice over again and over.  I’ve dragged kitbags, dragged sledges, dragged people, dug long drops, hauled ropes and built camps across the world.  When the works been hard, I’ve been hard with it.  At time we do need delicacy, but we need hard graft too.  Physical work can’t always be done by a machine or other people.  We need to pull our own weight and sometimes more.

Bernard found retirement too sedentary and I often saw him cycling and walking miles to keep fit. Well into his 70’s he put people 30 years his younger to shame with his exercise routine.  In that way we’re similar.  I also find sitting still difficult.

I was devastated at his passing and spoke with great love at his funeral service.  His work ethic, drive and determination will always be with me.