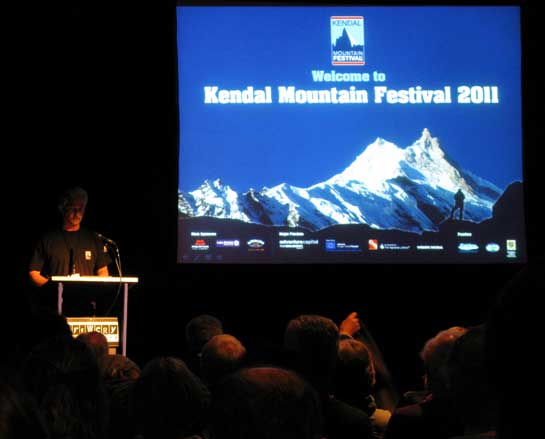 The Kendal Mountain Festival is the highlight of the climbing calendar in the UK, but for me it wasn’t always that way.  I had visited the festival years back and even had my Discovery Channel documentary “Nightmare at 20,000ft” premiered there, but I always felt a little lost.  Was it because I was on my own?  Or the fact that I didn’t know a soul?  Who knows, but it all changed one day on the Hornli Ridge.

I was climbing the Matterhorn with Mountain Guide Andy Perkins and as we chatted he realised that I was a skilled presenter.  “So, how do you fancy working at the Kendal Mountain Festival?” he asked.  Before I knew it I was loaded high with schedules and film lists, and on my way to the Lake District.  As a PSA Member I found the presenting easy enough, but the organisation and research kept me on my toes all weekend (well it would have if I’d got any!)

I picked up my great skiing friend Robin Taggart from East Midlands Airport, drove up a packed M6 and walked in the Brewery Arts Centre only a few minutes before Kenton Cool and Steven Venables hit the stage.  Both renowned climbers and Everest submitters, they began the festival with a talk show about Kenton and his climbing exploits.  Though Steve was asking the questions, the chat went both ways, revealing the human side of these two mountain giants.  Kenton was asked “What’s the next project?” After climbing Everest nine times, I think the audience expected a booming statement about a tenth attempt, but Kenton stopped many people in their tracks with a few simple words.  “I want to be the best dad I can be to my baby daughter Saffron”.  In my view a stunningly wonderful answer.  Thursday night was off to a belting start…

Friday morning saw me in the ‘On Demand’ room.  Let me explain.  As a presenter you need to be clear speaking, happy before an audience and know your subject.  The On Demand room is where we can preview the festival films, take notes and do our homework.  Subject knowledge is imperative in speaking and being able to feed interesting facts or information to your audience makes such a difference to their experience.

I presented four sets of films over the weekend, from Mountaineering to Wild Water and Mountain Biking.  I was exposed to enough heavy metal, collapsing ice, 80’s lycra, submersion, crashes, sea sickness, sharks, paragliding, avalanches, tears and laughter than a man can cope with and am only just recovering.  Special mentions from me go to the following films – Ice Revolution, Crossing the Ditch and Mammalian, all deserved prize winners.  But Kendal is not all about films…

I opened the film ‘Trango’ at the festival last year.  It starred Jerry Gore, an excellent climber from the UK, now based in the Ecrin.  Jerry is Diabetic and manages his condition in extreme conditions on expeditions across the world.  We had chatted on Skype many times and it was my pleasure to finally meet and open for him at the festival.  He’s an excellent speaker and quite a character.  We hope to climb together soon.

Saturday was a manic day, but filled with highlights.  One was to catch up again with Julie Summers.  I wrote a blog recently after her stunning talk about her great uncle Sandy Irvine.  Julie was hosting the Boardman Tasker Award for Mountain Literature, reviewing books and like many of us involved in the festival, running around at 100mph.  Over dinner on Saturday evening we discussed many topics and she has kindly agreed to review ‘Once Bitten and ‘Seven Peaks – Seven Islands’.  The day ended with the RAB party and I think my head hit the pillow around 3:00am.  Working at Kendal should be marketed as an extreme endurance event due to sleep depravation, pizza, chips and pie intake and the amounts of beer drunk.  Climbing in the Alps is much easier!

Sunday was a little more relaxed, well it was until my mobile rang.  “Can you accept an award on behalf of a film-maker who can’t make it?”  Before I knew it I was in a room packed with climbing legends going through the running order.  I hadn’t seen he film in question (Sketchy Andy) and had been given a pre-written speech from the director.  I saw a 30 second clip only moments before I had to be on stage, but that was enough to set the style of my speech.  I went suddenly from the smiles and thanks to “Yeeeehhhhaaa!”

In the Base Camp tent I was asked if I had travelled much and what mountain qualifications I had.  I was handed a form to fill in and thought for a moment.  The answers couldn’t have been further apart.  The box for travels was far too small and in the qualifications box I just wrote on word – Mad!

Big thanks go to the Kendal Hostel, the Warehouse Café and to Custard Climbing Creations (who personally knitted a new beanie for me and are lovely folk!)

I headed home through the fog, early on Monday morning, dropped Robin off at East Midlands Airport and returned to normality (if such a thing exists.)

Kendal Mountain Festival is a 4 day event with a footfall of over 8000 visitors.  We require our presenters to be knowledgable on mountains and mountaineers, personable, clear, and above all enthusiatic. They need to feel comfortable speaking concisely for a 3 to 5 minute period to introduce both films and live speakers in venues that range from an intimate 30 seater studio to a 500 seater theatre. They also need to be flexible and deal with last minute changes and problems that inevitably arise in a Festival environment.

Nigel Vardy ticks all those boxes, adapting his style and content to suit both subject and audience. Above all, his ability to enthuse shines through with his passion and personality. I’m delighted to have Nigel on the Kendal team, and look forward to working with him in future.

2 thoughts on “Kendal, but without the Mintcake…”

Live at the NEC…

I'll be speaking at this years Caravan, Camping…read more...

Still Got the January Blues..?