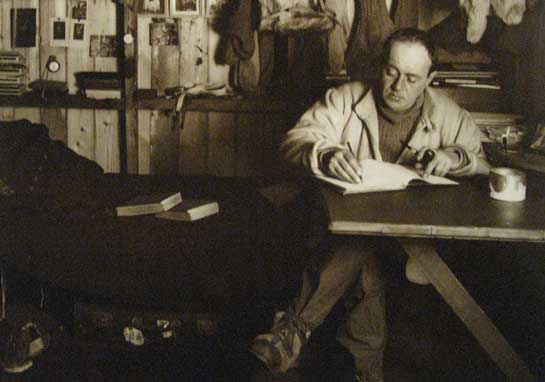 I still feel a bit shell-shocked from last nights reception as I write this blog, but I’ll do my best…

I often come home from an expedition and find the doormat covered in post.  Many of the letters are full of sales pamphlets, offers and bills, but one postmarked Buckingham Palace caught my eye.  I carefully opened the envelope to find a wonderful invitation to the Palace to commemerate Robert Falcon Scott’s fateful South Pole journey in 1911 – 1912.

I donned my best three piece suit and pocket watch for the occasion, but before the evening reception I visited the Queens Gallery for The Heart of the Great Alone: Scott, Shackleton & Antarctic Photography Exhibition. Before me stood wonderful pictures from the great expeditions of the early 20th century, shot on glass plate negatives in freezing and sometimes dangerous conditions. I stared into images I had seen as a child in encyclopaedias, and now as I man the originals looked back at me. It all looked so peaceful, but the eyes of the men gave away the harsh conditions they had to endure.
Both Scott and Shackleton are childhood heroes of mine and people to whom we owe a great deal in the world of exploration.  I have never felt to emotional looking at a set of pictures in years and highly recommend that you visit the exhibition.
Being so totally engrossed in the pictures, I accidentally bumped into someone, who to my great delight was my Swazi friend Sibusiso Vilane.  We hadn’t seen each other since 2007 when I completed my Seven Peaks, Seven Islands challenge in Madagascar and then spent a few days with him and his family in Swaziland.  We wanted to scream with delight in our surprise, but the gallery was a bit hush hush.  Talk is of a trip to the Drakensburg Mountains together soon…
Darkness had fallen outside as I left the Gallery and rounded the corner to the beautifully illuminated Palace with the Royal Standard flying at full mast.  A large crowd clad in the most incredible array of suits, dresses and goretex was entering the Palace grounds.  I showed my invite and followed them over the deep gravel, into the main courtyard and then the Palace itself.  As I walked inside I was stunned by the high ceilings, ornate works of art and grandeur.  Pictures just can’t convey the feeling of the place.  My home county of Derbyshire was well represented as I said hello to Dame Ellen MacArthur and Miles Hilton Barber as we walked inside.  In the cloakrooms I have never seen so many men worrying about their hair, straightness of their tie and collars in all my life.  I climbed a large open stairway swathed in rich red carpet and looked op at a huge glass dome.  ‘Buckingham Palace is a truly wonderful building’ I thought, ‘but it must be awful to heat!’  Behind me a huge marble sculpture was illuminated by a flickering fluorescent light.  Well, it seems that even the Queen has fun with the electricity.
I entered the main room to be confronted by a huge crown of people and I felt a little lost.  I’ve never coped with crowds well, but this was not an occasion to be a wallflower.  Armed with a glass of champagne I waded in as was soon comparing frostbite injuries with Sir Ranulph Feinnes.  We decided to have a ‘who’s got more frostbite injuries’ competition (hosted by Dr. Mike Stroud) and I thought I was doing well, until Jamie Andrew entered the conversation.  Jamie suffered frostbite as I did in 1999, but he lost both hands and feet and his climbing partner.  There are times in life when we feel that we’re having a bad day.  Jamie suffered horrific injuries, but gets on with life and had a smile across his face all evening.  Well done him!
Miles Hilton Barber was desperate to talk with Dame Ellen Macarthur, but being blind hardly helps in a crowd like this as recognising voices must be almost impossible.  He put his hand on my shoulder and I led him through the crowds and introduced them to each other.  I never got a word in afterwards as they talked non stop, so I left them to it and waited my turn to meet the Queen.
How do I describe the feelings and emotions of meeting the Monarch?  I’ve been a staunch Royalist all my life and standing in a queue to meet the lady herself felt quite daunting.  We had last met in 1977 at her Silver Jubilee when I was seven years old.  I had a feeling she might not remember me.  The queue shuffled forward, I was formally announced, I bowed my head, shook her silk gloved hand, said ‘Your Majesty’ and moved on.  It was all so quick and before I knew it I was shaking hands with the Duke of Edinburgh.  We have met before and exchanged a few words before I was ushered back into the crowds.
During the rest of the evening I also caught up with Alan Hinkes, Stephen Venables, Karen Darke, Rebecca Varley and Leo Holding before I left for home (hope I haven’t forgotten anyone!)  I had a wonderful warm feeling running through my bones as I walked out of the Palace and across Green Park to the Underground Station.  St. Pancras station was full of familiar faces due to train delays and I’m glad that the service terminated at Derby, as I’m sure I’d have woken up in Sheffield or Leeds…
We cannot forget the man who inspired the evening to take place.  I’ll finish this blog entry with one of the saddest and most stirring diary entries I have ever read.  To this day it still brings tears to my eyes.  These are the last words of Robert Falcon Scott…

Thursday, March 29 1912 – Since the 21st we have had a continuous gale from W.S.W. and S.W. We had fuel to make two cups of tea apiece and bare food for two days on the 20th. Every day we have been ready to start for our depot 11 miles away, but outside the door of the tent it remains a scene of whirling drift. I do not think we can hope for any better things now. We shall stick it out to the end, but we are getting weaker, of course, and the end cannot be far. It seems a pity, but I do not think I can write more.

For God’s sake look after our people.

2 thoughts on “A Royal night to remember…”