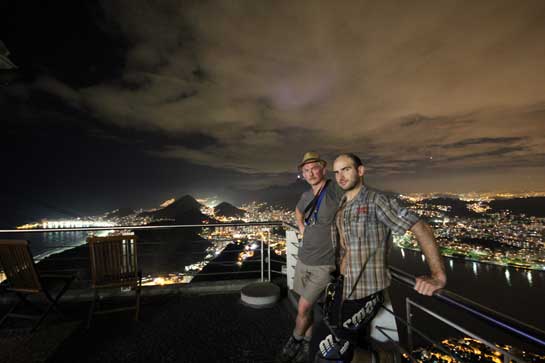 Now you might think me going a bit soft by travelling to Brazil, after all, I am Mr. Frostbite!  Well, I’ve climbed in many hot climates across the world since almost freezing to death on Mt. McKinley and they bring with them their own set of problems.  The hot and sweaty climates play havoc with my skin grafts and I have to watch them much more than on a freezing mountain.  The risk of infection is much higher and the chances of damaging them increased.  All that said, I was invited to climb around Rio de Janeiro by good friends Fiona and Felipe and couldn’t resist…

Within hours of landing and still suffering jet lag I was whisked into the mountains to relax and swim in the pools and waterfalls in the Parque Nacional da Serra dosa Orgaos.  Fiona and Felipe are members of the couchsurfing community and a large group of friends were heading out for the day.  I wandered through the cool jungles and hurled myself into the raging torrent of a beautiful waterfall.  It felt refreshing after over 20 hours on the road and in the air.  The Brazilians found the water cold, but to an Englishman it was like walking into a bath.

The time for relaxing was over as the next afternoon we scrambled up the Pao de Acucar or Sugarloaf.  Famous for its stunning views over the city and its place in the James Bond film Moonraker, it provides an excellent exposed scramble of grade 2/3 over granite slabs interspersed with forest.  The climb was straightforward enough except for one pitch, but due to a late start we finished in the dark.  Forcing through thick forest in the dark isn’t my idea of fun, but it was important to summit before the cable car closed, otherwise we would be staying on the summit overnight.  Frostbite wasnt going to be a concern though as it’s always warm in Rio!  The night views over Copacabana and Botafogo were incredible with the statue of Christ the Redeemer standing illuminated over them all.  We climbed to the Christ a few days later, but not on the normal bus route.  Instead we walked through a Favela and pushed through dense forest (which the children said was guarded by a huge beast!)  We survived unscathed and took in awide panorama of Rio.  We walked down after sunset, covered in mud, foliage and sweat, but with big smiles on our faces.

I was asked to speak at the Clube Excursionista Light climbing club about my mountaineering experiences and to talk about how frostbite has affected my life.  Cold injuries are unknown in Brazil, so when I mentioned temperatures approaching -60C there were a few gasps!  My words were translated into Portuguese by Felipe and here’s a lesson to anyone working with interpreters.  Always work with them before you speak, to make sure any unusual words or phrases male sense in both languages.  Check what does and doesn’t make people laugh, what does or doesn’t offend people and finally – timings.  You might need half as much time again due to the translation, so consider what to leave out of your time is short or fixed.  The evening was a great success and I have lots of new climbing friends in Brazil;

I visited a Favela behind Copacabana to see what the living conditions are like for the children.  The tiny streets have no order, houses are built everywhere and navigation is almost impossible unless you have a guide.  Conditions are simple, with basic sanitation, electricity and education.  Children here have to earn what they need, so many work after school running errands or working in shops.  They have little in the way of physical commodities, but all of them laugh and smile uncontrollably!  They are a lesson to us all in Entrepreneurship and hard work.

Before I left Rio, I decided to see the city from the air by helicopter, before heading west to Iguazu Falls.