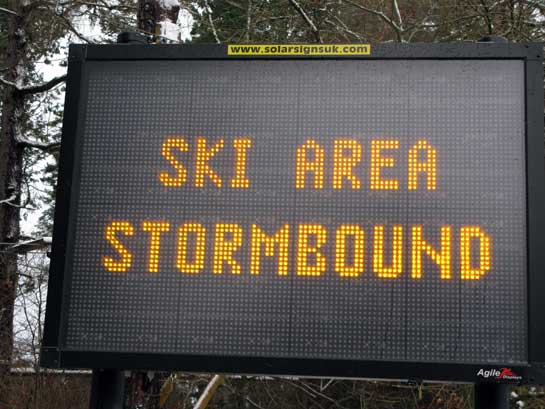 Sitting as many of us do, reading blogs like this in the comfort of our own homes, it’s easy to criticise other peoples actions.  I’ve just returned from a  week in the Cairngorms where I was fortunate (or unfortunate) enough to witness this first hand.

My friend Ian, and I have been climbing together for almost 20 years and once again we pointed the car northwards for Aviemore.  As we drove a news report came in of climbers avalanched in Coire an t-Sneachda.  Its one of my favourite winter climbing areas, and so I listened intently to the report, but thought little of it later on.  We arrived in Aviemore as darkness fell, and after an accommodation cock up (the SYHA had booked us in on the wrong dates), we settled down for the night.

The next morning we battled into the Coire through deep powder and poor visibility.  I decided to climb to the bottom of Aladdin’s Buttress and dig an avalanche pit to asses the risk.  A thin layer of hard packed snow was sitting on a thick layer of Graupel.  It wasn’t looking good.  The Graupel acts like ball bearings, releasing everything which sits above it, hence the high avalanche risk.  Ian commented that the wind ‘sounded like a freight train’ and indeed the forecast was for 75-100mph on the summits.  It was a day to retreat to safety.

We spent the next day walking in the forests in a driving blizzard, until we wandered down to the Cairngorm Hotel for a drink. There I sat, with a pint in my hand, when suddenly I recognised a couple of friends of mine.  I remembered that they were up for a long weekend on the hill and went to say hello.  Soon we were chatting away, but I noticed that they twitched and looked uncomfortable.  Then the line was delivered – ‘Nige, you know that avalanche last saturday, well that was us!’  I’m not going to print my next few words, but I think you can imagine my reaction.  Dave and Jez looked shaken, but ok.  I was thankful for that.  I had read some reports and heard rumours, and though many people believe everything they read in the press, I hold back my thoughts.  I have a healthy respect for journalists (as I work with many of them), so I’ll let you decide what you think, but in my view the truth is regularly skewed this way and that.  The tragic death of four climbers on Glencoe recently seems to have the press with the bit between its teeth…

Here’s the reports form the BBC, the Mirror, and the Scottish Herald.

So that’s the press perspective.  Now here’s what Jez sent me in an e-mail…

‘Last Sat 2nd February we were to climb on Coire N Sneachta in the Cairngorms; the
weather was set fair for the day and climbers were off up in their droves.
On arrival to the base of the Corrie one of my climbing partners had
forgotten to pack his crampons!  Great!  Due this omission and choice words
we walked out of the corrie and were going to complete the Facaille Ridge.
The avalanche report had indicated Considerable in the area for all aspects.
All of the bowl of the corrie was snided with climbers ascending rock
buttresses; gullies; walkers ascending out on the right hand side near to
Red Gully etc.

Climbers had walked ahead of us and had started climbing to the left of us; we were ascending the face to the left side; due to being cramponless!  Dave had to stick to the snow as he could not take purchase on the neve/ice.  At no point had we talked to other climbers who had been avalanched as the local press had all believe!  Neither did the conditions “feel” desperate; climbers were ascending all aspects of similar gradient everywhere and locally to us.

I had roped Dave on and was in the process of working the way up; I came
back down as Dave was struggling to grip; I was then going to either go down
or go down and across up the boulders which on reflection would have been
safer!!

The face slabbed with us three on it; triggered no doubt from us;  Now this is an experience being tumbled; swallowing snow/ice losing all awareness and feeling your body being dragged down a boulder field is not a training exercise!  I am sure we did not travel fast but with purpose!  I realised I was clear and immediately looked for the others; James was above and safe in terms of being buried; I shouted to James as to where Dave was and he pointed him out below;

My rope was so cemented in the snow I could not pull it out whilst sat in the snow; untied and made my way with a hobble to Dave, he thought he had a compound fracture, but this later turned out to be a lump of granite in his boot! We were shook up; but Alive; survival did kick in whilst avalanched; rolling to the right wear my thoughts and to keep an air space by swimming!

Sound ludicrous but I had a go; must have worked or simply lucky.

Climbers in the area saw the mess and were making their way to help; the
rescue teams Strathclyde police; Cairngorm Ski patrol were all in the
area; all who attended humbled us as we were vulnerable and struggling; A
massive thanks to all who stayed with us; the spirit of mountaineering was
evident from all; Hugh and Bob from the Strathclyde police were fantastic;
staying with us and keeping things sane; Thanks guys and a bottle of Whisky
will be up there with you soon!

The rescue from the helicopter was seamless; all brilliant and eventually
wiched out safe and sound to Inverness A & E who were also superb; all in
all an experience that I do not want anyone to experience but I know some
will from time to time; I kept apologising but no one chastised us which I
thank you all for; are we stupid? Arrogant? Wreckless.  I cannot answer this,
but I do know we were living and not getting fat on coke and pizza; playing
some spotty game on a computer!!!!!!!!!!!

That’s it; we all have a few injuries but soft tissue; no breaks as
suggested by a lot of the press; still off work but soon to return; will I
climb again time will tell but it has made me reflect as I am creeping
towards 50.  I will always go into the mountains; freedom is everything;
keep climbing and do not get duped by numbers; do your own risk assessments
and make your OWN minds up’

I remember lying in my hospital bed in Alaska, as the press argued over the rights and wrongs of rescue.  A little different to this Scottish incident perhaps, but everyone seems to chuck their ten penneth in when things like this happen.  Jus remember the people who were there…

There’s a number of ways we can look at this.  Some will criticise the climbers, but I’m always mindful of this, particularly if you weren’t there.  I think they were all very lucky and unlucky, but they are alive and well, and we must be thankful for that.  The mountains always hold dangers (believe me, I know), and we can’t take risk out of our lives.  It’s balancing that risk that counts…

Weather conditions are vital to every mountaineer.  Knowing what to expect, where snow is lying, it’s condition and avalanche risk are not to be taken lightly.  I use the Winter Highland and Scottish Avalanche Information Service sites.

All said, we skied the week away without getting in a single climb, and gladly met an 84 year old chap who had taken the coach from Swindon to Aviemore to walk and ski, before taking the overnight coach home a few days later!  He told wonderful stories of Scottish skiing in the late 1950’s and was a pure delight to be around.  I pray I’m that fit and happy at 84, but what impressed me even more was his smile, delight and sheer pleasure at being in the hills.

Never, ever loose that feeling and emotion…

5 thoughts on “Aviemore, Avalanches and an OAP – The Third Frostbite Report”