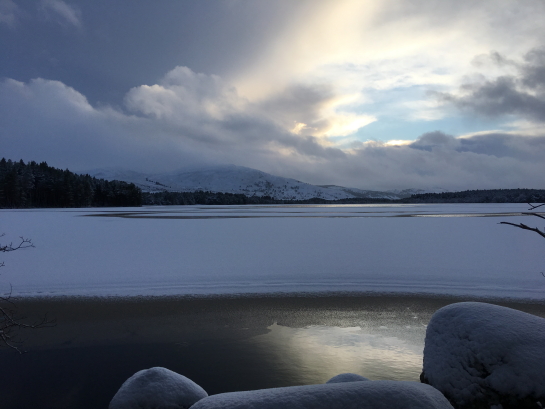 Every winter in Scotland is a lottery when it come to the weather.  I’ve experienced everything from snowdrifts to sunburn and blue sky to thick fog.  Driving north to the Cairngorms, my friend Ian and I were buffeted and bashed even at lower levels.  We drove to the Cairngorm Mountain Ski Centre for a quick look at the conditions before checking into our accommodation.  We opened the car doors and almost took off.  The next days foray into the hills saw us beat a hasty retreat when the wind speed picked up to hair-raising and visibility dropped to nil.  For some, this would be scary to say the least.  In my world – welcome to the mountains.

Conditions changed again with heavy and drifting snow.  Over eight inches fell in Aviemore during a day, making driving interesting to say the least.  We sailed sideways around a corner at one point with the grace of Torvill and Dean.  The ski areas were taking a battering, and website reports talked of delayed uplifts, closed runs and whiteout conditions.  The avalanche risk was high and cornices were whipped cream heavy.  Rather than be blown to bits, Ian and I wandered the forests around Boat of Garten and Nethy Bridge, stretching our legs and enjoying some sunshine in-between the heavy bursts of snow.  The saw only four other people all day, found a cracking little cafe and enjoyed the peace of the forests and lochans.  The light beaming through the Caledonian pines was something special, and deep shadows cast themselves across the powdery snows and icy waters.  We may be mountain men, but when the mountains are blasted, we can still enjoy the outdoors.

Conditions continued to be poor and the news was filled with reports of road closures, abandoned vehicles and high drifts.  It is frustrating when we cannot arrive on the spur of a moment when conditions are good, due to the requirement of booking leave from our professional lives.  Adaptability is the name of the game and we took a train north from Aviemore to Inverness.  The higher reaches of the A9 looked almost impassable, but Inverness was cold and clear.  We walked from the Castle, across the Ness Islands and down the Caledonian Canal to the Beauly Firth.  The wind was biting, particularly against the sea, but it was much better than being at 3000ft in a blizzard.

Finally our day came and the winds abated.  More fresh powder gave excellent conditions for a ski tour onto Cairngorm itself.  We ascended Coire na Ciste, disturbing coveys of clacking Grouse and a single Mountain Hare, before touring to the ice plastered Ptarmigan Lodge.  Many years ago, I remember sheltering in the little dome that it once was, before the Funicular came.  The new building is practical, but I think rather bland.  Ian didn’t fancy the summit of Cairngorm and headed downhill, leaving me with the top for myself.  I smashed through fluted ice and sastrugi towards the ice encased Triangulation Pillar and Weather Station.  The views were extensive and breath-taking, or was that the biting and increasing wind..?  I saluted the mountains with a wee dram of Arran Malt, ripped the skins off my skis, locked down my bindings and headed down at full speed.  Quite how I didn’t fall flat on my face is a miracle, as the crust broke repeatedly below me, but I made the pisted runs swiftly and headed downhill.  As I paralleled down, I saw a single figure, struggling with balance and skiing almost comically.  His name was Scott.  We’d briefly met on the summit, but he had chosen to walk to the runs and ski from there.  In his B3 boots and straight skis, he was trying to get down in one piece, but not doing very well.  I said hello and guarded him down the slopes as people whizzed by.  He fell a number of times, but kept going, until deciding to walk down in the search for sanity.  We shook hands and I left him to his descent.  In the mountains, we look after each other.  There are no heroes when the chips are down, just friends in places where danger exists, who hold hands, clip ropes and smile.  Scott made it down safely and that’s what matters.

The time for home had come.  We hadn’t had the trip that we hoped, but in the mountains, conditions rule.  The A9 south was comical, blizzard strewn and full of speeding drivers, but we cleared Glasgow and entered sunnier climbs.  ‘Why do you go..?’ you may ask.  ‘The weather is always hard work..!’  you may say.  In a twist of fate, the mountain conditions settled and improved as we headed home, but that’s life.  I’m too old a bunny to get wound up by such things…