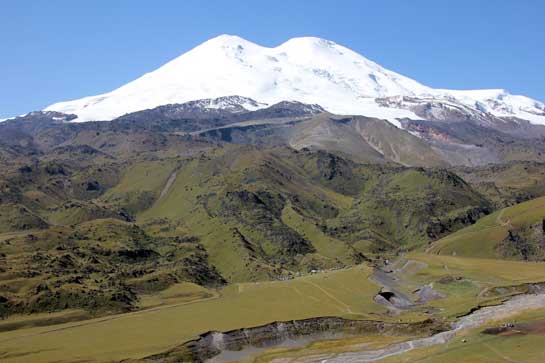 Standing as the tallest mountain in Europe, Mt Elbrus 5,642m (18,510ft) is not a climb to be undertaken lightly. High winds and freezing temperatures make this one of the world most notorious peaks. The west peak was first climbed in 1874 by Florence Crauford Grove.

I travelled to the Caucuses, with fellow climber Dave Padgen.  In his attempt to be the first climber with Cerebral Palsy to summit Elbrus, Dave had been forced down in 2009 due to poor weather, but now he was back. We joined a mixed UK/US team with Adventure Alternative for the expedition.

Simply getting to Base Camp is an adventure in itself. Flying from the UK to Moscow and then onto Mineralnye Vody is easy enough, but the road journey is an extreme test in off road driving. Thankfully our Russian Drivers were well skilled in getting the almost indestructible Ural vans over any surface or through any river. I first experienced these wonderful machines in Kyrgyzstan last year and have been a fan ever since. They may be simply constructed and feel a bit military, but they are practical, hardworking and practical. It took four hours of hard driving to reach the north side Base Camp.

The camp is situated on a large green plateau at 2590m (8500ft) with the huge twin peaks of Elbrus dominating the skyline above it. It was larger and more permanent that I had imagined with solar panels, generators, wire fences and wooden structures. I much prefer the peace and intimacy of a quiet camp, but at least we weren’t on the south side of the mountain where ski lifts are the norm. We settled in and after a brief rest began the important task of acclimatisation.

Climbing a mountain is never an easy task. Hauling equipment and stores, navigating through dangerous terrain, foul weather… All play their part in the mental and physical battle to the summit. Acclimatising is vital to allow your body to cope with the meagre amounts of oxygen at altitude. We walked up to a huge plateau at 3200m (10,500ft) on which the Luftwaffe apparently used as an airstrip during Operation Barbarossa during WWII. It was certainly large enough, but has precipitous mountains all around it. Take-off and landing must have been pretty hairy..! The weather closed in soon afterwards and we retreated to the comfort of Base Camp. Rain there meant snow higher up and the risk of avalanche. Not a good omen for the coming days. 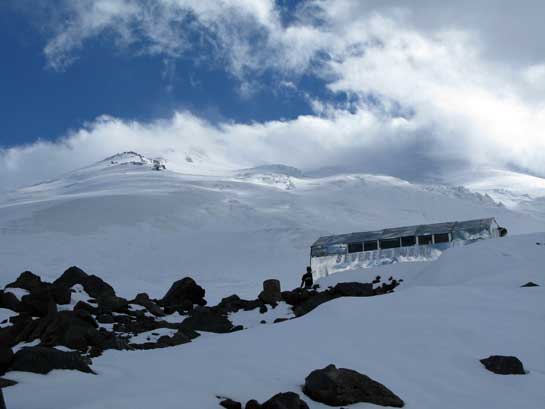 The next task was to begin hauling loads of stores and equipment up to the Severnyj huts at 3763m (12350ft). These sheet metal buildings are the only solid structures in the area and provide shelter for climbers from the worst that the weather can throw at them. We loaded our bags with gear and began the long and tedious walk to the huts in rain and then a driving blizzard. A recent rockfall had diverted the main path and we had to negotiate a huge boulder field covered in deep, wet snow. My feet are injured enough and hate slipping and sliding over boulders. I found the climb shattering, but also assisted Dave, who must have found the going even harder. He battled onward through difficult conditions without a complaint. We stored our gear and headed back to Base Camp, finally arriving long past after darkness had fallen. Here is a lesson to everyone on the mountains – never go anywhere without your headtorch..!

It was time for a rest day. My left foot was gaining a huge sore due to the pounding in B3 Mountaineering Boots and a day off would do it the world of good. I say a day off, but close to Base Camp are the hot springs at Dzhylysu. The huge Sultan Waterfall pours into the valley attracting tourists galore, of whom many bathe in the springs and take the waters. Well, there was nothing for it. They may be called hot springs, but let me tell you they are cold! The water is full of minerals and within minutes I felt my skin tingling. I’m not sure whether that was a good or a bad sign, but I did feel better for it. However, mountains are not climbed by sitting on your backside, so the next day the real work began.

It was time to stay on the mountain and push towards the summit. We climbed again to the Severnyj huts with more gear and slept the night. As the sun fell a beautiful moon rose from behind Elbrus and the skies filled red. The weather had changed for the better, but teams were still coming down after failed attempts. Rumours of -30’C windchill on the higher slopes worried me. After suffering frostbite on Mt. McKinley, I was hardly in a position to expose myself to such cold and wind. The night was peaceful and the following morning beautiful.

Some climbers summit from the huts, but it is a mammoth day. Almost 2000m (6500ft) to climb and then descend is more than enough for many. We had elected to camp at the Lenz Rocks 5297m (17,300ft) to break the day up, so tents and gear needed hauling there. Most of the team climbed there ok, but Dave struggled and I went down early with him and guide Gavin Bate. We had done enough for the day and there was little point of stressing ourselves further.

The good weather held and the next day we moved up to the Lenz Rocks and camped. Here I came into my element. Years of Mountaineering has taught me to get going when the going gets tough. The wind was firing spindrift across the rocks and tent pitching was difficult. I had gone ahead of Dave with the rest of the team to get the tent built and camp secured. There was a deal of faffing going on around camp, but with the help of Paul Gurney the tent was soon up and the stove burning happily away with a well needed brew on. The views were beautiful over glaciers, open highlands and even to high plateaus which looked something like ‘Sir Arthur Conan Doyles Lost World’. I was smiling from ear to ear and happy on the ice and snow. Here my feet worked well with my crampons and my feet felt better. The cold bit a little, but I didn’t care. Dave came into camp and was soon in the tent laughing and drinking tea. We did have one slight dilemma however. We had a wonderful salami sausage to eat, but no decent knife to cut it with. There was only one solution – I held it on my knee while Paul stabbed it with an Ice Axe! Thankfully he was accurate with hiss trikes and I still have my knees left… We all needed an early night as summit day was coming and we would need to be on the hill for 5am. 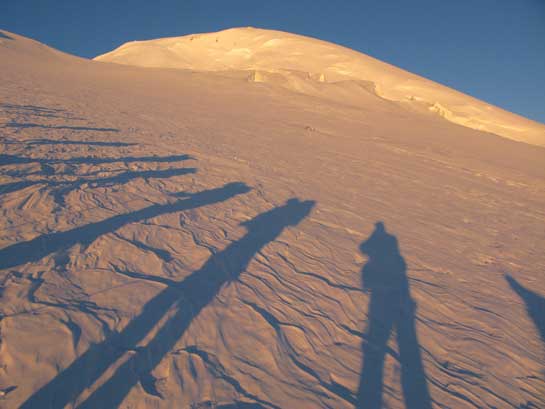 The day dawned beautifully as we climbed the snows into the saddle. Darkness had been replaced by a wonderful red glow, followed by pink snows and burning sunlight. Dave was now with Gavin and breathing supplementary oxygen to assist him on his attempt. He may call himself StumblingDave, but let me tell you, he was off like a rocket! Dave had a different summit plan to everyone else, so we bid him farewell and entered the saddle to see hoards of climbers approaching from the south. The final slope to the west peak stood before us. It was easy enough to climb, but had a few exposed sections further up. Here is where you must have your head straight. As long as you understand how to use your ice axe and crampons efficiently and you can keep going it’s easy. If you begin to doubt yourself, well that’s another matter…

I climbed onto the summit plateau and walked the few hundred yards onto Europe’s highest point. Below me stood the huge expanse of the Caucuses with many peaks still unclimbed. A few wispy clouds breezed in-between them as the sun burned overhead. I was hoping for a quiet few moments to reflect on the climb, but the peak was crowded and busy. I unfurled my Union Flag for the last time and stood for photos.

Climbing a mountain is, for some, a spiritual experience. For me it is also a place where I can reflect upon my injuries, my memories and my feelings. Many times over the climb I thought I would not make it, but I did. Perseverance, state of mind and good weather had brought me to the tallest part of Europe, but the summit is only half the journey…

As on every mountain, we spend days, weeks, months getting to the summit for a few precious minutes, before we must head home. I descended the summit slopes whilst assisting some of the team, before wandering down the saddle and back to the camp at the Lenz Rocks. Dave and Gavin were securely in a hut on the saddle for their summit attempt and I wished them well. The camp was some broken down and by nightfall we were safely encamped in the Severnyj huts. Smiles shone all around in-between the suntans and tired faces. I find a beautiful peace in being happy, shattered and after having achieved. There is really nothing quite like it. My left foot was a real mess, but the hard work was done. We made it back to Base Camp the next morning and bid Elbrus farewell the following day. The weather was still stunning and she stood sentinel over all below here for miles around. 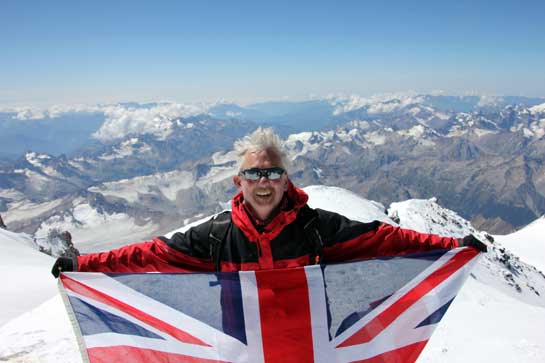 I was desperate to hear about Dave’s climb when we met again in Mineralnye Vody. He looked strong, tanned and cleaned (he beat me to the shower), but the last 100m had defeated him. I didn’t know quite what to say, but he had a broad smile on his face and was happy enough to claim the first full traverse of Elbrus by a climber with CP. As long as everyone is happy, then I’m happy. That shower I had waited for so long felt wonderful and fresh clothes did me the world of good. It was time to head homeward to the UK.

I mentioned earlier that I unfurled my Union Flag for the last time on Elbrus. Before anyone asks – I’m not giving up mountaineering! The flag which was given to me as I lay frostbitten 13 years ago and has travelled over 150,000 expedition miles with me was stolen from Base Camp. I’m a sentimental old soul and felt a great loss at losing it, but I will get another. I learned a long time ago that the accoutrements of life are easy to replace. Fingers, toes and memories are not…

If COVID has taught us anything, it is…read more...

Since the dawn of time, the older generations…read more...

I'm frequently told that I need to 'Play…read more...

Its’ not all Mountaineering – Some of us Care too…

Ambassador for the Martin Moran Foundation…

I'm delighted to be an Ambassador for the…read more...