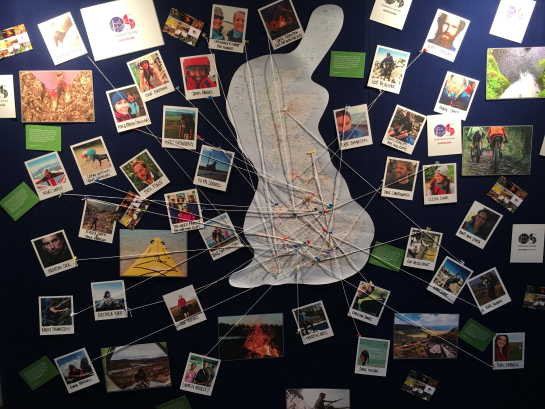 It was late in 2016, when I glanced upon a tweet inviting applications for Ordnance Survey Get Outside Champions.  Initially I passed it by, but looked back and thought I’d give it a go.  I had no idea, that not only would I be selected, but what a lovely bunch of adventurers I was going to meet…

Readers of my blogs will know that I’ve balanced world adventures with engineering for over two decades.  In some whys the relationship is symbiotic, in others they are at loggerheads.  When Ordnance Survey decided on a Thursday for a Launch Event, my heart sank.  I wrote recently about balancing structure with flexibility,  and it took a fair bit of shift swapping and favour cashing to free the day, but it was worth it.  My drive south to Brockenhurst in the New Forest was traffic delayed, and I walked into the event a little late.

Have you ever had one of those moments when you walk through the door and everyone turns around..?  It wasn’t the best start to my day, as I find busy rooms and crowds quite hard to deal with, but thankfully a few hello’s calmed any nerves.  Before me sat people of all ages who adventure in the British Isles and across the world.  Regardless of where I’ve been, and what I’ve achieved, I’m always in awe of other people’s adventures.  I’m not going to name names (the list is here), but there were families who travel together, walkers, swimmers, climbers, travellers, paddle boarders and cyclists.  They seemed to be filled with plans of future adventures across Britain which looked very exciting, and I felt quite jealous of their flexibility.  To some, not knowing what even the weekend brings is the norm, but I have to plan months in advance because of my professional life.  I have a few trips up my sleeve however, and hope to make some sort of an impression over the coming year.  What does come from such a group is collaboration.  Adventuring alone is ok at times, but life is so much better when you travel together.  You can share experiences, skills and knowledge.  Let’s see what 2017 brings.

Fellow Champions Sean Conway and Ben Fogle both spoke at the day, sharing their passion for the great outdoors.

Getting Outside isn’t about tackling the north face of the Eiger, or swimming the Zambezi.  It’s about getting more people out of their houses, off their sofas, and doing more in the British Isles.  This could be as simple as walking to school, as wet as free swimming and as demanding as walking the length of the nation.  Times change and even since my childhood, social issues such as obesity and lethargy have become a huge problem across the western world, but particularly here in the UK.  Here’s a few thoughts from the NHS…

There’s so much more that can be said, but I think we all get the idea..!

During 2017, alongside the other champions, I hope to inspire as many people as possible to Get Outside.  Whether it be cycling, wild camping or walking to the shops, we all need to do more.  Many of us have office jobs, which breed inactivity, poor eating and stress.  Lets Get Outside and cure ourselves of those ills, particularly during the cold, dark winter evenings.  Follow us using the hashtag #getoutside on Twitter.