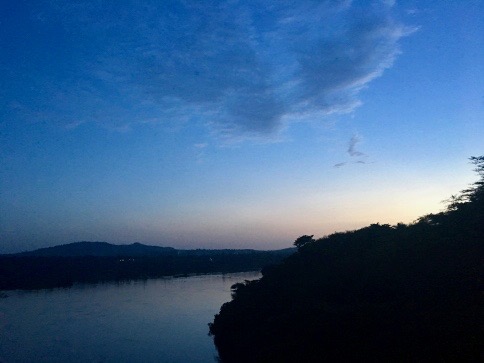 I rarely look for adventure.  Adventure finds me.  The years of scouring maps and magazines for interesting places are gone.  I’m extremely lucky to have wonderful friends across the world who share my passion for travel, as we love to share our experiences.  Sibusiso Vilane and myself met many years ago, climbing Carstensz Pyramid in Iran Jaya.  Since that day, we have been great friends.  Sibusiso has had some wonderful ideas, including cross the Drakensburgs and trekking the Otter Trail.  So when he said ‘how about climbing in the Mountains of the Moon in Uganda..?’  I leapt at the chance.  The Rwenzori’s were extensively explored during the colonial era and even starred in Rider Haggard adventure books.  The Idi Amin era saw much change, but people are back.  I have to admit however being surprised when asked to bring Wellington’s as well as an ice axe, crampons and mountain boots..!Having a few days spare before Sibu flew out, I treated myself to a couple of days fishing on Lake Victoria.  I fished a great deal as a child, but except for occasion spells during trips overseas, I haven’t done much.  The chance of catching a Nile Perch seemed too much to resist, so I joined as group of local friends based in the town in Jinja, and set off over the huge lake.

After an hours motor, we pulled close to an island and looked for a bottom of around 8 metres in-depth.  Technology allows you to see the lake bottom and even fish, so you can cast your lines accurately.  We set four lines and slowly trawled up and down the shore in wait.  Sure enough, at 9:57 I struck hard onto a 20 lb plus fish and fought it in.  The celebrations begin in more ways that one.  As soon as it was landed the beer was opened.  It was only 10:00am..!  A slow trawl seemed to work and I caught three large fish during the day.  It was smiles all round.

The lake wasn’t as deep as I expected, but it was certainly busy.  Fish farms, transports and huge trimarans floated along.  Pelicans, herons and raptors galore filled the azure blue skies.  Villages popped up as from nowhere, where people lived and worked together in small communities.  It could be idyllic, but I hear that AIDS is desperate in some areas.  A very sad thing in such a beautiful place.  After a full day we headed ashore with our catch.  I felt extremely happy, but also relaxed and calm.  I’ve really struggled as of late to find my way, but fishing seems to help.  I used to fish a lot, but gave out up in my late teenage years when work came along.  Perhaps I should make a return….

The next morning I fished again, but had no luck.  Ah well, that’s the way the cookie crumbles.  It was time to face the Kampala and Entebbe traffic once again, and meet my great friend Sibusiso Vilane.

He arrived late in the evening, looking as young and sharp as ever.  With him was Nthabiseng Ramalope, a climber from Capetown.  She was well-travelled and up for the challenges of the mountains.  There was much to catch up on and talk over, but we were all shattered and much journeying lay ahead.

The Ruwenzori Mountains lie in the far west of Uganda, and due to the long drive and poor roads, we broke the journey in the Kibale National Park, where we spent a day tracking chimpanzees and other primates.

Meting our closest cousins was an experience I can hardly describe.  There’s never a guarantee of catching them, but the reserve didn’t disappoint.  Within a few minutes of heading into the undergrowth, our AK47 toting guide had a group of alpha males right before us.  They were habitualised, which means that they are used to human beings.  Only a few groups are, with many others deep in the forest and left well alone.  Visitors like myself help fund research into these wonderful primates lives.  Anyway, back to the undergrowth..!  A large group of females with young clinging on were moving through the trees and they took some keeping up with.  We did get some wonderful moments with them though and I sat, looking into the faces of them.  Like all us primates, they protect their young, bringing them up in close family groups.  The couple of hours we had are well and truly burned into my memories.

Next came the Mountaineering phase of the trip.  We headed out to the Ruwenzori Mountains and saw a huge change in the topography.  The slopes got steeper and stunning crater lakes dotted the hillsides.  As we entered the park unfortunately, the problems began.  We were soon arguing over porters, prices and organisation.  There was some stiff negotiation which sorted a few prices, but it brought a bad taste to the trip.  Thankfully we set off with everything in hand and began walking under the blazing sun.  The roadsides were filled with well-managed crops of bananas and maize, with hydro-electric dams happily generating from the booming river.  We cleared the park gate and started a long ascent into the hills.  We climbed 1000m that first day, surrounded by deep and untouched forest.  The trees were ancient, grasping onto deep valleys and river edged.  Miles of grasses, ferns and bushes smothered everything, leaving not an ounce of ground to be seen.  All this arboretum provided excellent shade to this rather pale Englishman.  Sibusiso and Nthabiseng walked well, but I struggle.  The ‘Parang Ridge’ was a heck of a drag, but i kept a steady pace and we made the Nyabitabe Hut 2651m (8,697ft) around 6pm.  After a refreshing cold water shower I felt much better and settled down for the night.  As the sun fell, the hillsides took on a mystical feel as deep shadows were cast into the river valley.  Soon the light was gone and we settle down for the night.

The next day was a long slog of huge boulders, fallen trees and bog.  Regardless of the obstacles and climb of another 1000m (3,280ft), we made the John Matte Hut 3505m (11,500ft) by late afternoon.  The river Mubuku poured its way down the valley from the glaciers above.  Is this were the Nile truly begins..?  We saw our first ice in the distance, which lifted our hearts as we slogged uphill.  The hut was spacious and with plenty of beds for we happy three, so spreading out in the available light was the name of the game.  There’s no solar power as you might find in the Alps or Nepal, so you make the most of what God gives you.  The porters seemed a happier bunch today, probably because, like us, they had got their shop in order.  I’ve always found that no matter how many times I travel, I need a day on the hill to get prepared.

It was time to face the legendary Bogs.  When I first read about the area, everyone advised Wellington boots.  They still call them Gumboots out here, which is what my grandparents knew them as.  I’d read horror stories of people sinking up to their waists in black morass, but many of my fears were allayed due to the construction of wooden board walks across the worst sections.  What would have taken hours, now takes minutes and you keep your feet dry.  The Lower Bigo Bog brought our first Giant Lobelia, but it was the upper bog which impressed me.

I’ve travelled a great deal in my life and few things take my breath away.  I’ve climbed mountain ranges, hacked through jungles and driven roads that would scare many, but the view across the bog and into the mountains was truly inspiring.  A towering dragons back of a ridge stood to my left, undulating peaks to my right and the Margherita Glacier stared down the centre.  Plants covered the slopes, even standing out on the distant ridges and all looked untouched.  It was a time to put the cameras down and open my eyes.  Few people get a chance to see this place and i wasn’t going to let it pass me by.

Bujuku Lake opened up below the peaks and its deep waters looked quite haunting.  The bog was filthy, wet and at one point, it took half of my right leg down..!  It’s no worse than Kinder Scout or Bleaklow at home, but I only just escaped filling my wellies.  We moved into the Bujuku Hut and settled down as tomorrow was a climbing day… 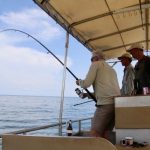 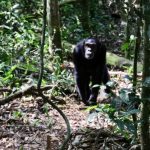 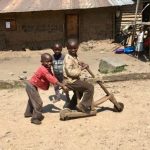 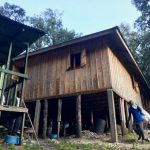 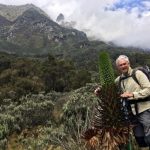 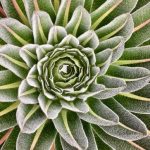 Looking into a Giant Lobelia 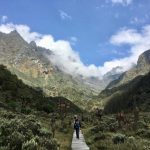 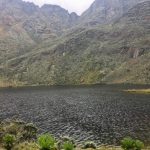 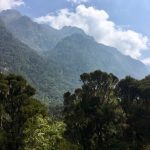